Jay Wilkinson, founder and CEO of Firespring, a Nebraska-based marketing and software company with a purpose to leverage their people, products and profit as a force of good, recently joined the QSR Nation Podcast to discuss the importance of branding and building a brand storyline.

Below is Part 2 of 2 summarizing what they discussed. Read Part 1 here. For the full podcast episode (#089), visit pfsbrands.com/qsr-nation-podcast.

If you have a business that's struggling with generating positive sales, what are some of the marketing strategies that you would tell them to look for that can drive growth?

Wilkinson: There are many different tactics that people can use. One of my favorite resources is the book called Traction. In it, they lay out 19 different channels that a business can use to get traction.  A lot of the channels are online or technology oriented, so it talks a lot about blogs, search engine marketing, social media, etc. But there are a lot of channels that traditional companies overlook because they don't think it's for them.

One such example is “Unconventional PR,” also referred to as Guerrilla Marketing. There are so many things that even a small business or small franchise can do to create TOMA (Top Of Mind Awareness). The good thing is that most of these tactics don't cost a lot of money. We sometimes think of them as publicity stunts but they can be as simple as sending handwritten notes to customers for a week or offer every customer that comes in a free high five.

There are many other kinds of things that franchises can do to elevate awareness in their community. They can get involved in speaking engagements at local colleges or high schools. 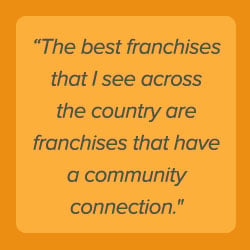 A friend of mine had a sushi restaurant in Austin, Texas and he did a free Lunch & Learn sushi class to companies and the home economics programs in schools. His business grew 30% in the following year – just from that public outreach and connection with his community.

The best franchises that I see across the country are franchises that have a community connection. They find a way to align themselves with a cause or a mission or a purpose that they're passionate about and then they just double or triple down on that. Those kinds of things, again, often don't cost money, but find ways to connect your product or service to the community.

You mentioned TOMA (Top of Mind Awareness). Can you expand on that?

Wilkinson: I believe that one of the most important things, especially in the franchising space, is building TOMA, that top of mind awareness when people are at a critical point of making a decision such as what should I have for lunch today or where should I go today? In a restaurant or service business especially, there has to be TOMA built so when people are considering options, your business comes to mind.

I know a restaurant owner in Fresno, California that actually started a blog essentially writing about his experience in other restaurants all around the community. It became so popular that it became a resource when people were determining what food option they wanted next. He obviously doesn't talk about his own restaurant in his blog, but everyone knows what restaurant he owns, and his business has gone through the roof because he's built thought leadership around the food space in his community.

It’s important to note – this success doesn’t happen overnight. It essentially takes one year of at least one post a week to get to that point.

What marketing trend do you foresee for 2019?

Wilkinson:  I've seen a lot of this happening already – but businesses are starting to gain more clarity around their marketing strategy through personas. Personas are a way to define your target market, your demographics and the psychographics of who it is that buys your product or service. It’s important to be as clear as possible about that, look at your own customer base and then do a qualitative and quantitative analysis of who buys your product or service. Using that data, put together anywhere from one to five personas and name them.

So, for example, this is Miguel. Miguel visits our restaurant four times a week, typically over the lunch hour. Miguel has four kids at home and he typically gets takeout because his wife works two jobs. And so on….

Personas allow you to understand your ideal customers, the customers that are most likely to be attracted to the brand. With personas, it's much easier to build focused marketing campaigns that are appealing to a persona as opposed to trying to appeal to all of your prospects. I've seen a growing trend in that and I think it's going to continue to escalate over the next year, really identifying the archetypes of a brand and the personas that those archetypes serve.

If a budding entrepreneur was sitting in front of you right now, what advice would you give them? 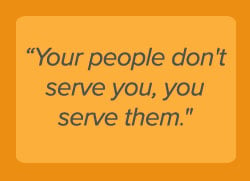 Wilkinson: It’s a tough life we choose as an entrepreneur. The truth is that as an entrepreneur, you're not in business for yourself. You’re not your own boss – if you’re doing it right, your bosses are how many customers you have or how many employees you have. It’s the mentality of a leader of an entrepreneurial led company, that your people don't serve you, you serve them. You are there to facilitate, empower and embolden the people around you to rise to the occasion. I've seen that Steve Jobs quote flying all over the internet, "I don't hire smart people and tell them what to do, I hire smart people so they can tell me what to do."

Being a leader that is open, malleable and vulnerable to the world around you so that you can constantly learn and grow is critical. If I had to choose one word, it would be vulnerability.  As an entrepreneur, the only way to build a brand in today's world and to do it in the right way is to be vulnerable, to be open and honest about your mistakes, to be willing to say I'm sorry when you mess up, to pull your team together when you guided them or pushed them down the wrong path and say “I was wrong.” Be willing to constantly regroup and refocus, but do that with confidence and swagger. You don't do it with your tail between your legs or constantly say I'm sorry. It's a combination of confidence, swagger and vulnerability that makes an entrepreneur work (in my mind) in today's world.

If you had one piece of advice for those businesses who are struggling, what would be your suggestion for them to change their story brand line and make sure they get that new message out there? 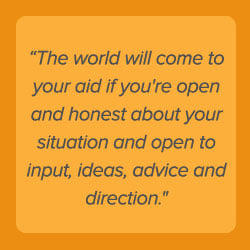 Wilkinson: It starts with being willing to ask for help. I know a lot of business owners who said they were fine and then wow, were out of business. They’re prideful people and don’t want to admit they're struggling. But I think there's an important starting point in just being willing to ask for help. The world will come to your aid if you're open and honest about your situation and open to input, ideas, advice and direction.

Back in 2001 right after 9/11, my business was about to fold up; any sane person would've already given up. I was fired as the CEO of my own company by my board of directors. The thing that made it possible for me to rise up from the ashes and succeed is because I pulled my team together and asked them for open and honest feedback and help. We sat down for several days and strategized together, coming up with a game plan. Slowly month over month, we made it work and recovered. Within three years, we were wildly profitable and had bought the venture capitalist out. It changed my whole world to think about this concept of “we're all in this together” and the people that I worked with in business aren’t seen as people here to serve me, I'm here to serve them. In my opinion, focusing on that mentality is the key to getting a business out of any hold that it may be in.